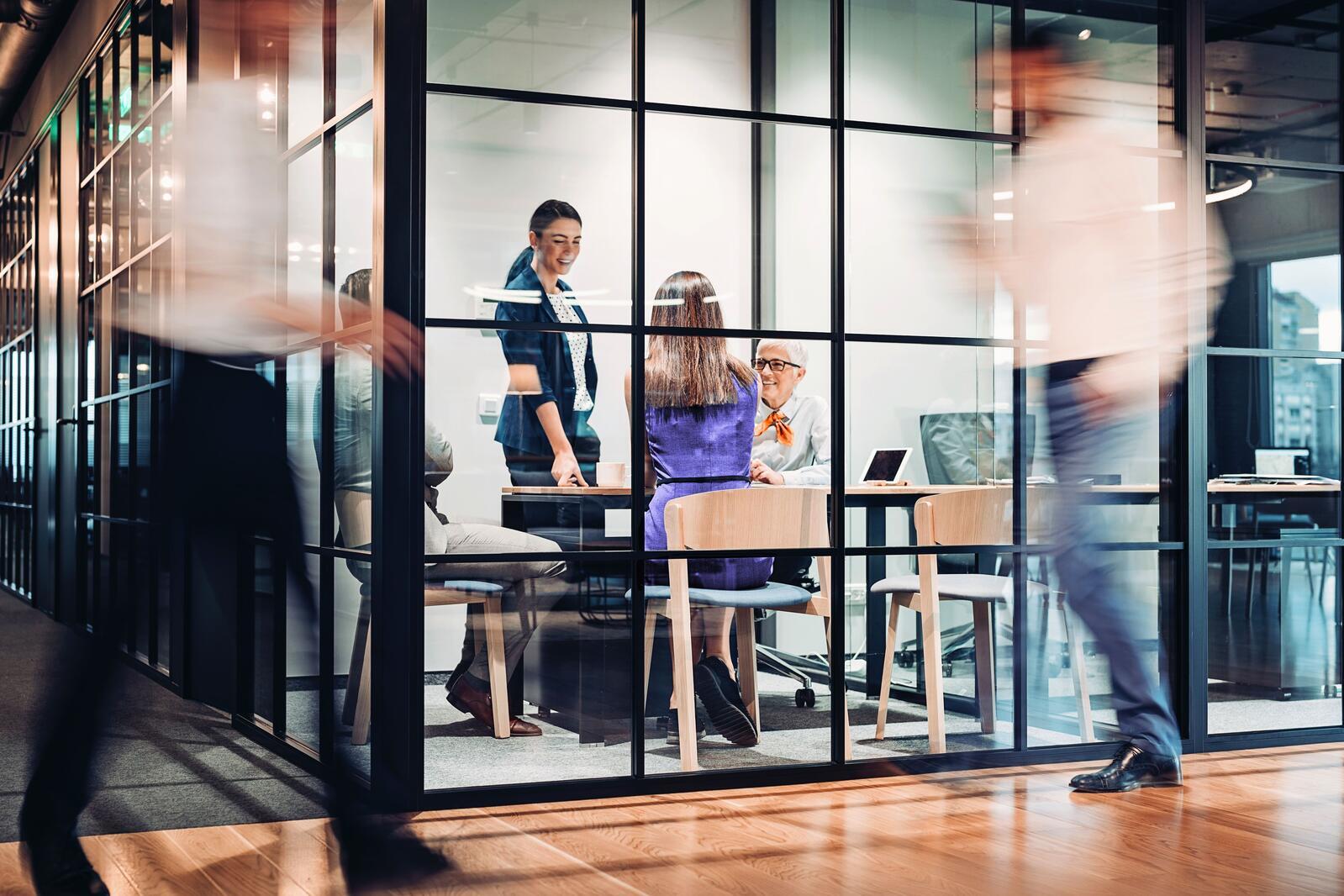 At the onset of the COVID-19 pandemic, the outlook for coworking operators seemed bleak. The densely packed, community-oriented seating arrangements characteristic of coworking spaces fell out of favor for obvious reasons, and members, most of whom were on short-term agreements, were able to cancel their memberships within a matter of months while the operators themselves remained on the hook to pay rent. Since March of 2020, when COVID struck the United States, 54 coworking locations across Metro DC have announced their closures. If they were all to close permanently, it would equate to a 16% contraction in coworking square footage regionally and a 25% contraction within Washington, DC, which was hit hardest. 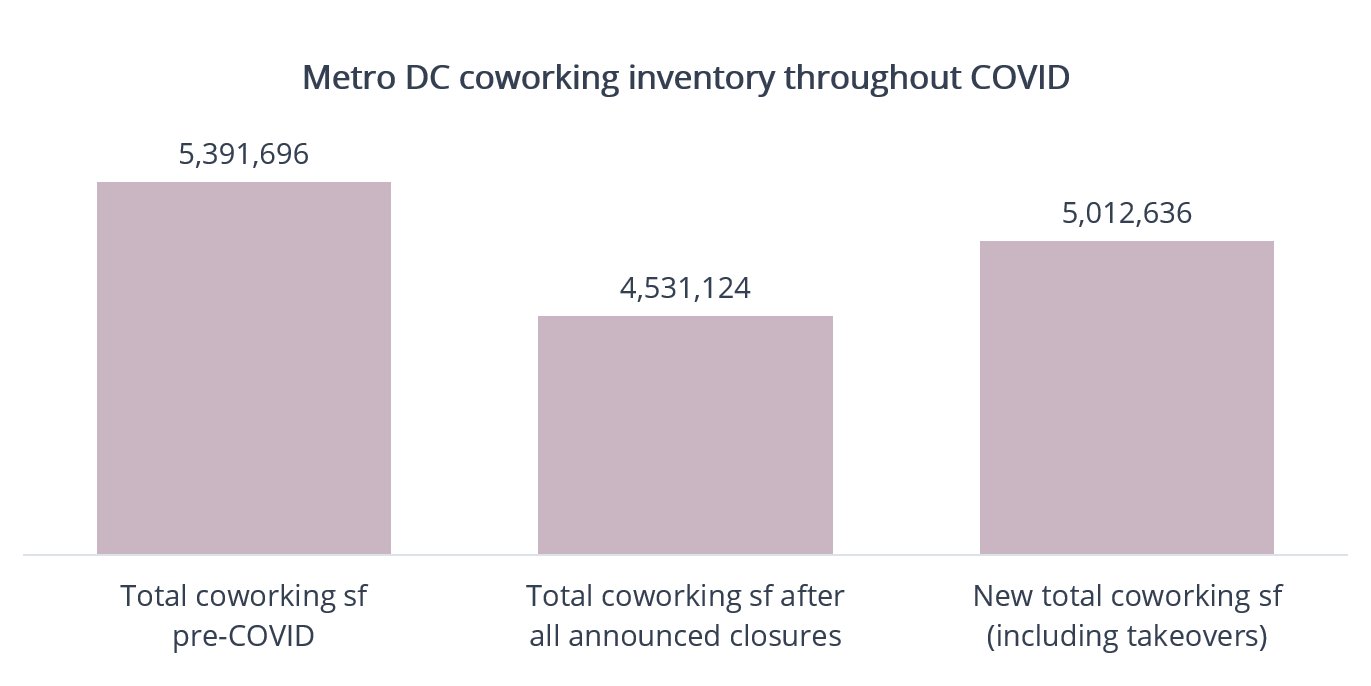 As we emerge from the pandemic it's clear that conditions aren't as dire as they once seemed. Tenants returning to the office are unsure of exactly what their future space needs may be, and coworking has the potential to offer them some flexibility with regard to both size of space and length of lease term. Moreover, a shift toward remote work could have some employees seeking an alternate workspace outside their companies’ main offices, such as a coworking office closer to home. Things are looking up for the coworking sector, but that doesn't mean the sector will return to pre-pandemic norms. Read on to explore some emerging trends in Metro DC’s flexible office sector.

Cut out the Middleman

Not every announced coworking closure became an immediate loss to the market; at least 18 locations were taken over by an entity other than the original operator. Some of these were rival coworking companies, but what’s most interesting here is that many of the new managers are not coworking operators, but landlord brokers or even landlords themselves. For example, Douglas Development recently announced that it would open a concept called “The Mark” in three of its buildings that were vacated by WeWork. JLL is offering a concept called “The Pitch” in several shuttered MakeOffices locations in DC and Northern Virginia, while the Bethesda MakeOffices will be under the “Heyday” brand from MRP Realty. 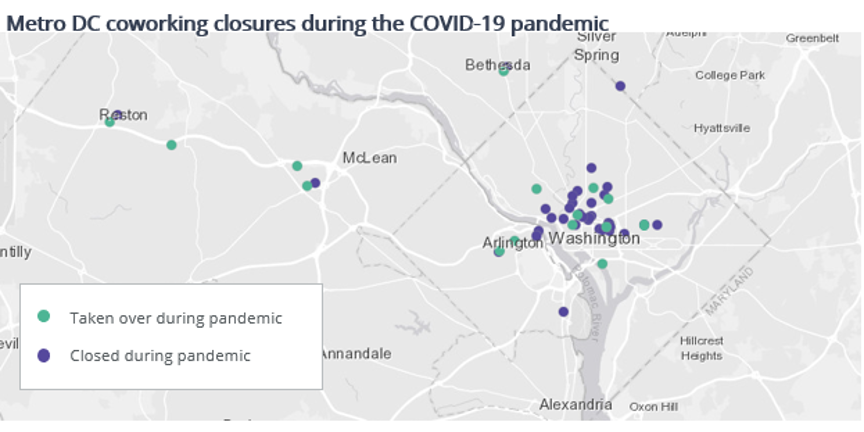 As landlords begin running their own coworking operations, the market may realize that it never made sense to simply lease space to an operator who will in turn lease the space to its members. Coworking operators themselves seem to be coming to the same conclusion, as hardly any of the big names are out in the market looking to sign traditional leases. Most are now seeking management agreements under which they would be partners to landlords, rather than tenants, and would share revenues coming from coworking members. This mitigates risk to the provider and gives the landlord additional upside potential if the space does well. On the other hand, without the assured income of a traditional lease, many landlords will hesitate to grant the hefty tenant improvement allowances required to create a modern, high-end coworking space.

From Space to Service

Many coworking members choose coworking not for the space itself, but for the services offered within that space, which creates an opportunity for coworking operators to lend their services expertise to traditional office spaces. Cove, a local operator that dealt in small coworking spaces mostly below 3,000 square feet, closed all of its remaining locations during the pandemic. The company reimagined its business model and made a pivot to sell its technology and services to office landlords and individual companies that want the upscale management of a coworking space without being in one. Meanwhile, on-demand office provider Breather closed all of its locations and ceased operation, but sold key components of its space-management technology to Industrious, one of the few providers that kept opening new locations during the pandemic.

Within the coworking segment, Avison Young distinguishes between spaces that use traditional shared office models and those that use more “creative” models, which are primarily distinguished by their design aesthetic and much denser space utilization. Although the two existed in roughly equal numbers before the pandemic – 110 traditional locations and 127 creative locations – traditional coworking spaces fared much better than creative ones when market conditions took a turn for the worse. To date, 48 creative coworking spaces have announced their closures during the pandemic, and of those, 29% have been taken over by other operators. In contrast, just 6 traditional spaces have announced their closure, and 4 of those (67%) will be kept open under a different operator. 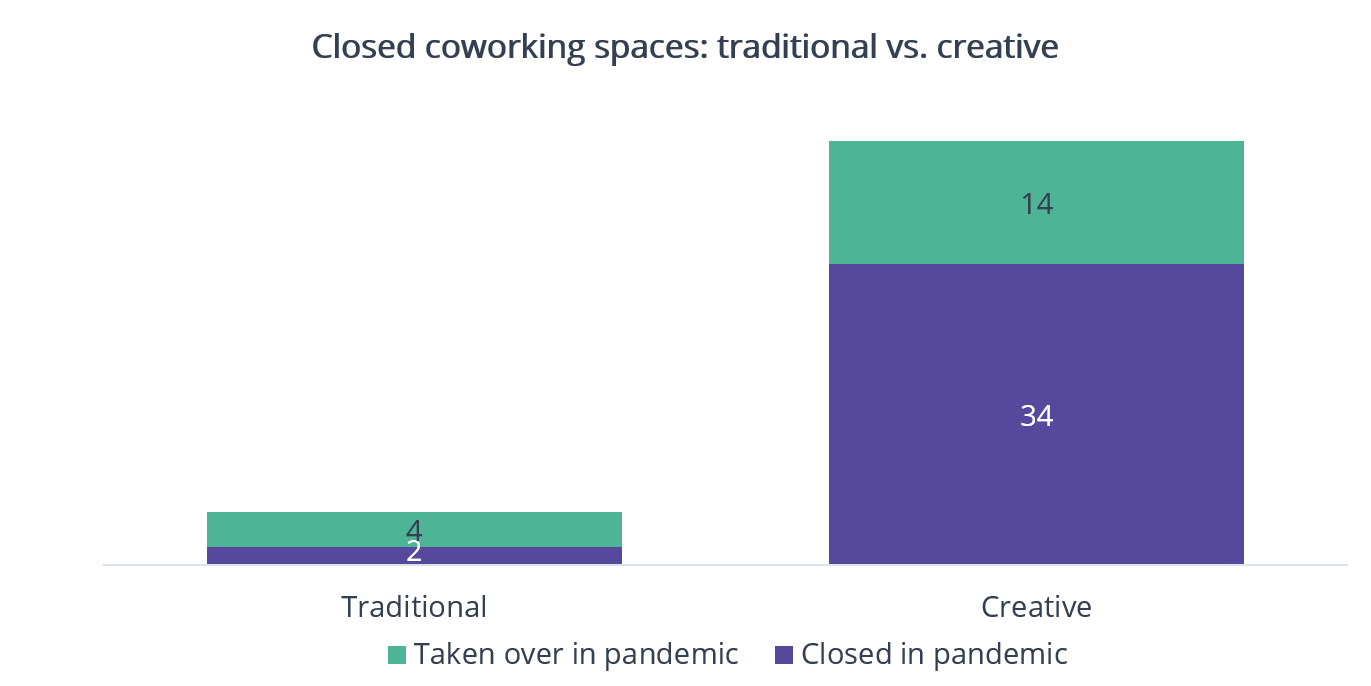 There are a few reasons why traditional coworking spaces fared so much better than creative ones. Most importantly, they tend to offer larger office suites with greater separation between companies and between individuals, granting an inherent advantage during the pandemic when distancing requirements limited how densely packed a space could be. While the practice of shared “hot-desking” became very common in new-age coworking spaces between 2015 and 2019, it became infeasible when COVID-prevention measures were mandated.

Coupled with this, traditional coworking operators also tend to have more established locations than creative ones. The average traditional space has been open since 2013, versus 2016 for the average creative space, giving it nearly twice as much time prior to COVID to establish a stable membership roster. Moreover, traditional coworking spaces are more common in the suburbs, particularly Northern Virginia, whose defense-contractor-driven economy fared a bit better than Washington, DC’s during the pandemic.

To date, the coworking sector has been unable to tap into the region’s largest driver of office demand, the US government. The federal government occupies roughly 100 million square feet of office space across the region, about half of which is leased while the other half is owned. Over the past decade, the General Services Administration (GSA) has made strides to consolidate its real estate footprint and is now turning to flexible office to help further that cause. In July 2021, GSA announced that it would devote a portion of its headquarters at 1800 F Street NW to coworking space, which would be available to employees of various federal agencies.

The feds’ shift toward shared workspace could create tremendous opportunity for private coworking providers, too. In early 2021, WeWork hired GSA’s former Public Buildings Commissioner, Dan Mathews, to lead its government solutions division. While serving the government presents some unique challenges with regard to privacy and security, overcoming those challenges would be a lucrative achievement if it meant capturing even a small fraction of the $1.8 billion in annual rent that federal agencies currently pay to Metro DC landlords. For the government, the benefit could extend beyond space consolidation to recruitment, as coworking offices would likely appeal to a broader pool of workers than the average government office space does.

Given how fluid coworking models have been over the course of the pandemic, it will be very interesting to see what materializes for the industry in the coming months and years. With some operators making the switch to services rather than product, and some landlords opening coworking spaces on their own, there’s still plenty of runway for coworking business models to evolve. As the pandemic wanes and workers begin to return to an office setting, expect to see smaller companies flock to coworking. This will at first be an intermediate solution for many of these tenants as they reassess their office needs, but operators can seize this opportunity to offer a level of service and value that retains these members and makes coworking their new normal.