Scott Harmier: I had just worked a 24-hour shift. I was heading home in my pick-up truck listening to the news. A small plane had possibly hit the tower. I could tell from the newscasters’ voices that this was a big deal. Something wasn’t right.

My co-worker was driving on the same highway. I sped up to him and tried to roll down the window. I was yelling, “Turn on the news radio! There’s a big event going on!” He couldn’t understand what I was saying.

I rushed home. I called the station to see if they needed help, and then I waited for a phone call. I was ready to go back in a heartbeat.

Chief Michael Mauvais: I was driving south on Highway 9 to a firefighter training class. I heard on the radio that a plane had crashed, and then my wife called. At first, I assumed it was a smaller, private Cessna-type airplane. When the second plane hit, I knew something wasn’t right, and it became very real, very fast.

There were 343 firefighters killed that day. Almost 3,000 civilians and first responders. Three of our Boeing teammates. We were in shock.

Harmier: Things changed right away. There was a lockdown at Boeing. Within a day or so there were high-level security and fire meetings on how to stop an aircraft should something occur. New procedures were put in place on communicating with aircraft, so we were notified if any airplanes moved on our ramp.

Our hackles were up. We were ready to stop something at a moment’s notice.

Mauvais: There was a ton of uncertainty around the immediate future. Are more attacks coming? Will Boeing be targeted? What will we do to protect our aircraft and our employees at Boeing? It impacted the company in a big way and the entire economy was impacted, especially the airline industry — not to the extent COVID-19 has, but still huge. There are parallels between the economic impact and safety of our employees that we’re seeing today and then.

Harmier: In the end, there was a shutdown of commercial flights, so we were focused on how can we safely get aircraft back in the air and provide that trust. I was nervous about flying again, and at the same time, I was confident in how quickly we engaged to make the flight deck safer.

Mauvais: Security and Fire Protection worked closely with Boeing Commercial Airplanes to design and test new hardened doors that protect the flight deck and pilots. Those secure doors are still in place today. We also developed a training program for domestic and international first responders on how to breach the doors in an emergency.

The fact that Boeing airplanes were used against American targets, which ultimately killed firefighters and so many others, we took it even more personally. We were even more committed to preventing something like this from ever happening again. 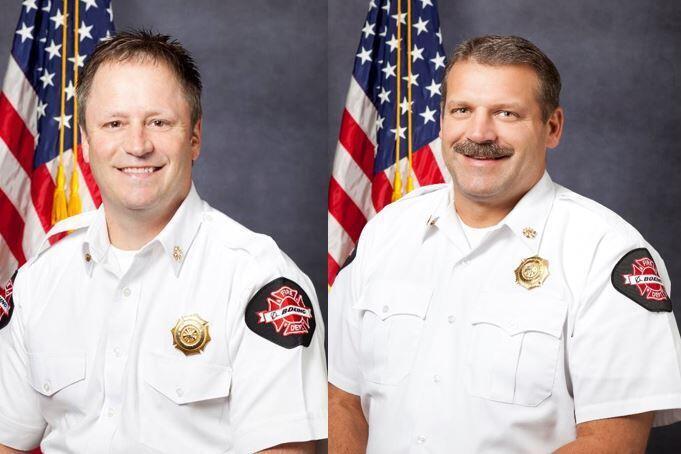 Harmier: There were many lessons learned. Sept. 11 is important to our history and to our younger firefighters who were not around then.

Every year, Boeing fire stations commemorate the day with a moment of silence followed by the sounding of the tones and a remembrance. We remember those who died on that day, the family members affected, and it refocuses us on safety to make sure we’re safe and have the right safety measures in place.

Mauvais: There were a lot of lessons learned. Among them, eventually things turn around and you will get to the other side of it. Things will get back to somewhat normal, you just have to maintain hope and optimism.

In remembering this day, the company also honors the three Boeing employees who were aboard the American Airlines Flight 77 that crashed into the Pentagon: Chandler “Chad” Keller, Ruben Ornedo and Dong “D.C.” Lee. Keller and Ornedo worked at Boeing Space & Intelligence Systems production. In their honor, two flags were installed at the El Segundo, California, facilities. Lee worked for Space & Intelligence Systems in the Washington, D.C area. A local school, Newton-Lee Elementary, was named after him and another 9/11 victim, to preserve their memories.

Resources for coping with pandemic uncertainty

Just as employees experienced uncertainty following Sept. 11, so too are many coping with the stress and challenges of the COVID-19 pandemic. In a July well-being survey, employees reported feeling the most stressed about the impacts of the uncertain business environment on their work and personal lives.

“We are experiencing heightened stress as we cope with the pandemic, and this affects how we care for our mental health,” said Michael D’Ambrose, executive vice president, Human Resources. “We need one another’s support to lean on, and I encourage all teammates to check in with each other, share Boeing resources if needed, and remind one another that no one is going through this alone. We will get through this challenging time together.”

To help support employees’ emotional and physical well-being, Boeing offers a number of well-being resources, including counseling sessions, meditation and self-care tips, and upcoming webinars. Employees are invited to join a Sept. 24 webinar that offers neuroscience-backed micro-steps for building resilience and prioritizing well-being. For a full list of September webinars, click here.

Employees seeking support during this time have confidential access to professional services at no cost through the Employee Assistance Program and Solutions for Living. Visit eap.web.boeing.com to learn more or call 866-719-5788 (in the U.S.) or +44 20 8987 5966 (outside the U.S.).

Franklin Russell, a Boeing firefighter who put out fires for the U.S. Air Force during the Vietnam War and who was on duty during Sept. 11, offered a hopeful take from his 44-year career.

“I’ve been through good times and bad times. Right now, we’re going through some bad times,” he said. “One thing I know for sure, this will pass. We’ve got to work through it, keep on performing, because we will come out stronger and better.”