Aro Royston is a graphic artist, Boeing Global Services, in St. Louis, Missouri. He is also the vice president of the Boeing Employees Pride Alliance (BEPA). Royston shares his story as part of a series chronicling catalyzing moments that led LGBTQ+ employees to live their true selves at work — and advocate for others to do the same. Each story will feature an accompanying ally of the LGBTQ+ community.

I’ve been with Boeing for seven years. Before then, I worked as a tattoo artist and as a manager at Joe’s Crab Shack.

I didn’t transition until I had been working here two to three years.

When  you’re thinking about transitioning, it’s a very personal journey that  usually starts early in life. I had always felt male. Growing up, I felt  like I was in the wrong capsule. It never felt right.

When I got  to Boeing, I realized what transgender actually was. Once I found out  about it, there was no going back. There was no way I could live without  doing it. 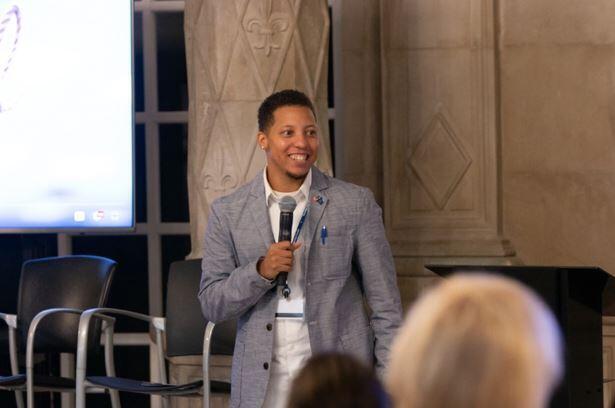 Aro Royston, graphic artist, BGS, presents about his transition to a group of senior leaders at the Boeing Leadership Center in 2019. (Photo courtesy Aro Royston)

I confided in a couple of coworkers, and one told me that Boeing has Employee Assistance Program (EAP) resources. I found a therapist who had worked with transgender employees before. I also learned that the company would help me with a transition plan, with direct support from a Global Equity, Diversity & Inclusion (GEDI) focal. The GEDI focal helped me set up a plan and timelines I was comfortable with. Then they sat down with my team — without me having to be present —  and explained to them that I would be transitioning, and that on such and such day, I would legally be male at work. It was such a comfort to know someone was there, advocating for me and helping prepare my team to accept me as I fully am.

I am second-generation Boeing, and my mom works in Phantom Works. I wanted to make sure they would treat my mom the same way — that no one would go up to her asking questions. They sent out a note to both of our teams’ organizations, saying that there is an employee who transitioned and will now use male pronouns. So everyone was aware.

The first day back in the office after I officially transitioned, I was nervous. I always dressed in male clothing, but that day, I was extra dressed up. I had a shirt, vest and tie on. I wondered what people would say to me. But my team was extremely supportive. I think people genuinely saw me for the person I was: I was good at my job, I was good with people, and nothing had changed.

Once I transitioned, I felt 100% comfortable in my own skin. My production rate increased. I was already a productive employee, but if you can bring your whole self to work, you’re benefiting your employer as well as yourself. 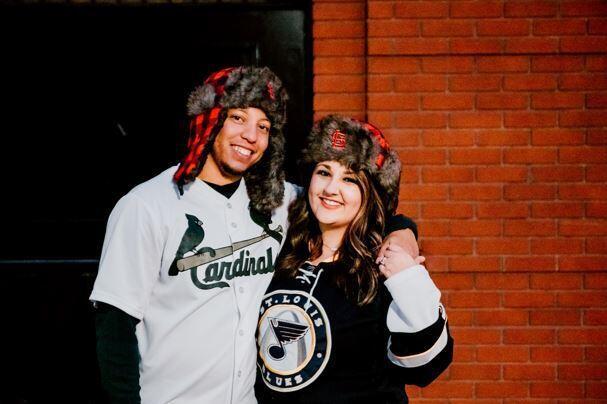 Royston pictured with his wife, Natasha, in an engagement photo taken before their wedding in 2019. (Photo courtesy Aro Royston)

Today, a lot of people don’t see me as transgender. I am finally who I am, and the hard part is looking in the rear-view mirror. I just want to move forward. It’s an internal struggle to be an advocate —  it’s scary. It is easier to walk in the shadows than bring attention to it. But it’s important for me to be vulnerable in order to help others.

We celebrate Pride Month, which commemorates riots and protests and the early efforts of those who stood up for equal rights. We celebrate the courage of those who stand up to the injustice of police brutality, and of those taking a stand and being proud of who they are. A lot of black transgender women were instrumental in starting our equality movement. The recent events have inspired me to stand in my authenticity — in my black-ness and my trans-ness. It took me a long time to love myself. So I stand proud, and I love seeing other people stand up and be proud of who they are too.

A mother's take on her son’s transition at Boeing 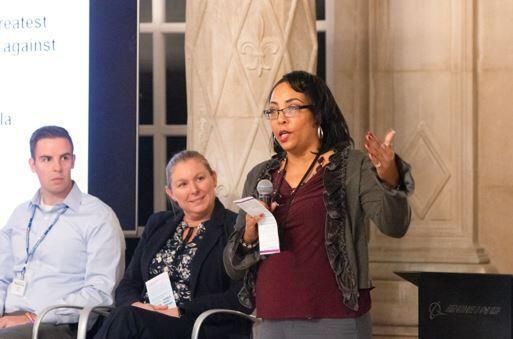 Sylvia Reese, staff analyst, Boeing Defense, Space & Security, and mother of Boeing employee Aro Royston, shared how she experienced her son’s transition at work to a group of senior leaders at the Boeing Leadership Center. (Boeing photo) Aro Royston’s mother, Sylvia Reese, staff analyst, Boeing Defense, Space & Security, has worked at Boeing for almost 40 years. When she first learned of Aro’s transition, she struggled at home and at work.
"That took some adjusting for me," she said. "It was stressful because all my coworkers knew that my daughter is now my son. But I talked to Aro and listened to him. And to me, I see Aro as a person — a loving, caring person who I have learned a lot of things from. It takes a strong person to step out of their skin to say this is who I am regardless of what you think. I just tried to support him the best I could."

She said her managers informed her of an email that would share Aro’s official transition and his preferred pronouns with her organization. Afterward, many employees asked Reese for advice on how to handle similar situations with their family members or friends. She tells others to ask questions, listen and seek support.

In 2019, Reese watched as her son presented to senior leaders about his transition at the Boeing Leadership Center. At the end, Reese stood up and shared her experience of his transition at Boeing — the first time she told her story publicly.

"I think Boeing handled it well," said Reese. "Aro joined the company at the right time. I’m very proud of Aro and of what he’s accomplished at Boeing. The process was hard, but we both survived. Now, when Aro is in my work area, he stops by and I introduce him as my son. I call him my sunshine. We keep it going."