Kathleen “KJ” Jolivette is a vice president in Boeing Defense, Space & Security (BDS). Jolivette shares her story as part of a series commemorating Native American Heritage Month, which Boeing is celebrating this November.

Growing up on the Rosebud Sioux reservation in South Dakota, Kathleen “KJ” Jolivette never imagined she would one day lead an organization that delivers premier attack helicopter capabilities for the U.S. Army and global customers.

"As a young girl, I was not exposed to opportunities outside the reservation," she said. "We were very focused on family and staying together, so many people took jobs on the reservation." 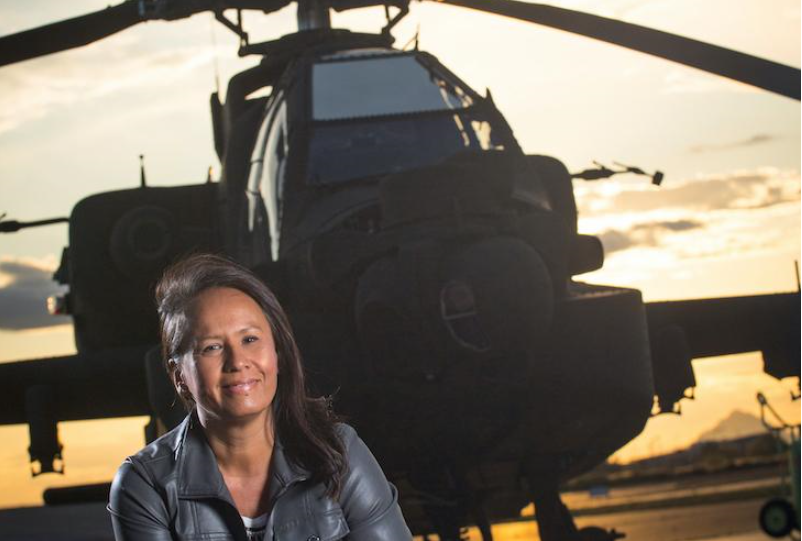 Jolivette, now vice president of Attack Helicopter programs and senior site executive for the Mesa site, grew up watching and learning from her mother’s example and hard work ethic. Her mother, who worked as a nurse’s assistant while raising Jolivette and her siblings as a single mother, inspired Jolivette to aim high.

After graduating high school, she joined the U.S. Army, where she served for eight years in the supply career field before earning a bachelor’s degree in finance and accounting and, later, an MBA from Washington University in St. Louis. She joined Boeing as an intern in 2002, where her career has since soared. Throughout the years, Jolivette has held positions ranging from business manager for the Middle East and Africa in Boeing Defense, Space & Security, chief of staff to the then-CEO of BDS, and her current executive position in Mesa.

Throughout her Boeing career, Jolivette has worked to expose more Native American students to professional opportunities, particularly in the fields of science, technology, engineering and math, better known as STEM. She has partnered with the American Indian Science and Engineering Society (AISES), an external organization dedicated to expanding Native American students’ access to careers in STEM. Boeing has partnered with AISES to help students for the past 20 years, and AISES recently named her its Professional of the Year.

"It’s always been my goal to help students, especially those that come from the same background as me," Jolivette said. "I always advise them to take advantage of the resources that organizations like AISES have to offer."

"As a Boeing leader, I feel it is our collective responsibility to help the next generation learn about and pursue STEM education opportunities," she said. "We need to support and encourage them — and ensure they know that they can achieve their goals."

To those whose vision for the future has more guardrails than guide posts, Jolivette offers sage advice on how to fully realize their career aspirations.