Black History Month Q&A: 'I've always been the only'

In honor of Black History Month, an HBCU graduate and employee talks with a Tech Fellow about being the “only” and what it'll take to leave that in the past.

Teaira Spencer, a graduate of an HBCU (Historically Black Colleges and Universities), is an early career talent adviser who works with External Technical Affiliations and the HBCU strategy team. George Parker is a technical lead engineer and Technical Fellow, Boeing Research & Technology, who has worked at Boeing for 32 years.

Teaira Spencer: I had the pleasure of meeting you at last year’s Leadership Institute for the Thurgood Marshall College Fund where you were a presenter. Why do you think these types of partnerships, including our Boeing Black Employees Association and other ETAs like Black Engineer of the Year Awards, are important for black professionals?

George Parker: For one, it gives students an opportunity to see what the world is like. At BEYA, you’re meeting Boeing engineers, HR professionals, people who work with computers and space, and you’re getting exposure. It’s important for students, and it’s important for Boeing to be a part of it, because you’re looking at the next generation of students — and you want the diversity. Iron sharpens iron. 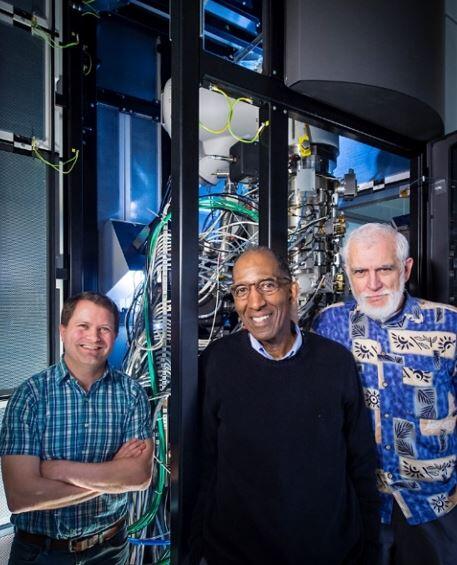 George Parker, a Tech Fellow and a technical lead engineer, Boeing Research & Technology, poses with his teammates, Chris Meyer and Eugene Ledbury, in front of the Titan 80-300 Scanning Transmission Electron Microscope, the only machine of its kind at Boeing that performs failure analysis and analyzes atoms. (Boeing photo)

Spencer: I want to ask about a time you’ve been the “only.” For me, I was the only black woman in my rotation program, and it was hard to ignore. I chose to see my “only” status as an advantage because I knew my experiences could add value. Now I use it as an opportunity to increase the diversity of our programs in my work with the HBCU strategy team. What are your professional experiences of being the “only”?

Parker: I’ve always been the “one.” I grew up in New York City, which is a melting pot, and I didn’t understand being different until I went to college. When you feel people are looking at you or not giving credit where credit’s due, it’s difficult. You do feel you have to be a little better than the average person. When I came to Boeing, there weren’t many scientists in my organization. I remember people looked at me like, what credentials do you have? I had to prove I was capable. Sometimes being an African American, if you carry yourself a certain way, there’s a little fear there because it’s unknown. That’s where I just be real and talk about some of these things.

Spencer: You’ve mentored many engineers and you coach basketball outside of work. How has mentoring younger generations helped you grow?

Parker: When you mentor, it’s a two-way street. I look at it as a father-son, father-daughter relationship. If you want to be an engineer, I’ll show you how to get there. But a mentor can only carry you so far. My job is to teach them and then give them to a sponsor who can take them farther. Your sponsor helps you climb that ladder. I’ve mentored about 25 graduate school students at the University of Washington, and half of them have come to work for Boeing. I always try to get them a sponsor, but we maintain that relationship. 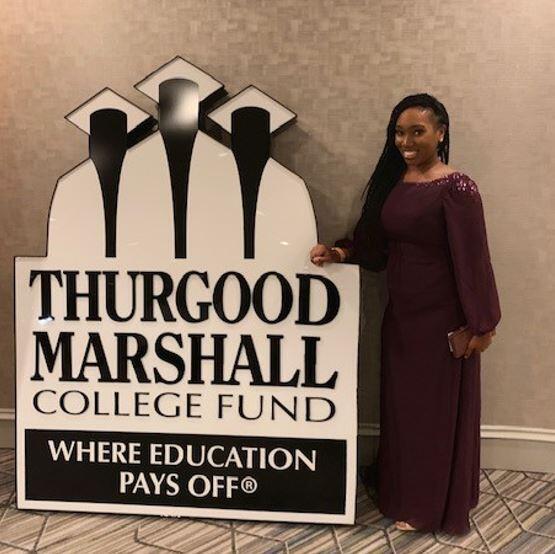 Spencer: When you take the time to look at Black history, it’s come a long way, but we’ve got a long way to go for full inclusion and equity. What do you think it’s going to take to get us there?

Parker: It has to start from the top-down. Change is hard. But change is good and we have to enforce change. We have to live it and be transparent about it. I don’t think a lot of people are transparent about it because of fear. Fear will encapsulate you. If you shine a light on a rabbit, the rabbit doesn’t run; it freezes. We need to shine a light on areas where you don’t have inclusion for change to come about. 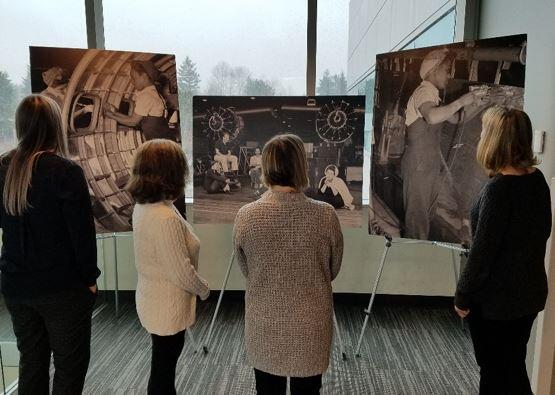 A new exhibition in Everett, Washington, focuses on an often-overlooked population of skilled workers during WWII: African American Rosie the Riveters. During the war, as orders poured in for B-17 Flying Fortress bombers and B-29 bombers, Boeing sought out and trained more female employees like Dorothy West Williams, a sheet metal laborer who was Boeing’s first black production worker. By 1943, of the 329 black employees who worked at Boeing, 86% were female. Williams’ and her fellow Riveters’ hard work helped increase production of B-29 bombers from 60 planes per month in 1942 to 362 planes per month in 1944.

The poster series, which features images of the Riveters, will travel to Renton, Auborn and Charleston next. The Riveter roadshow was originally designed to coincide with Black History Month in February and Women’s History Month in March, but, says Sara Bowen, vice president of Global Equity, Diversity & Inclusion, “these images are so compelling and important, we may extend the display throughout the year.”

“Boeing’s strength has always been our people, and we’ve benefited from diversity since our earliest days as a company,” said Ted Colbert, president and CEO of Global Services and executive sponsor of the Boeing Black Employees Association. “Black History Month is a great time to recognize those who came before us, like the African American Rosie the Riveters, who paved the way for a more inclusive Boeing. Regardless of what challenges they faced, they showed up every day and worked side by side with white, Asian and Hispanic women to contribute to our company’s success. They were Boeing trailblazers and we honor their legacy.” 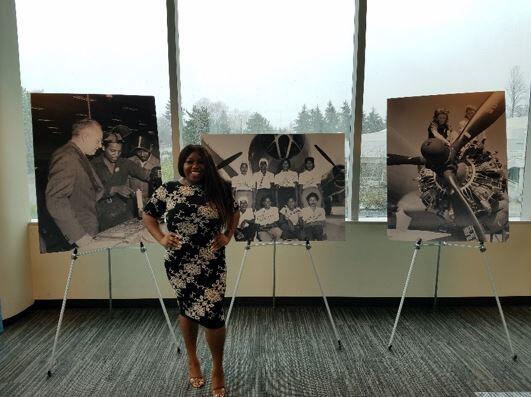